What happens when diverse groups of people from across the spectrum of our community get together for a little holiday merriment? 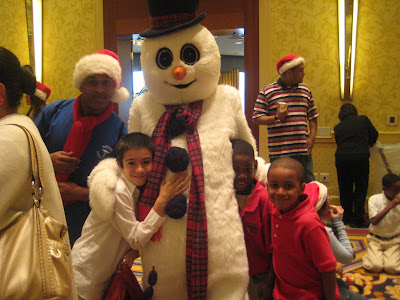 Check out the photos and blog post featured on the Hartford Courant's website about The Connecticut Forum's 16th Annual Children's Holiday Party for more than 250 Hartford Elementary school children - an event made possible by the gracious support of Target Stores, the Hartford Marriott Downtown, Lincoln Financial Group Foundation, and our incomparable army of Forum volunteers.

Happy Holidays!
Posted by The Connecticut Forum at 2:07 PM No comments: Links to this post

Here at The Forum, we believe that the more we seek to understand different perspectives, the better we will be.

That's why before every Forum we convene task groups composed of diverse members of our community to help us develop a thoughtful discussion outline for the Forum moderator. Since Forums are live and unscripted with no speeches or prepared remarks, we do not share these discussion outlines with panelists - just the moderator. Even so, Forums are always unpredictable due to dynamics between panelists, the skill of the moderator, and questions posed by the audience.

At our first task group meeting for our upcoming Forum, God: Big Questions...Bigger Questions, featuring Rabbi Harold Kushner, Rev. Peter Gomes, and Christopher Hitchens, we talked a lot about the questions many people have about religion, faith, and God, such as:
Now we'd like to hear from you!

What questions would you like to hear in a discussion about God? What topics or concepts do you think would make for a fascinating Forum with our panelists? Let us know! We welcome your thoughts.

Posted by The Connecticut Forum at 2:34 PM 12 comments: Links to this post

The Uncertain Future of Print Journalism

By Jamie Daniel, Advancement Associate at The Forum

The Tribune Company, which owns The Hartford Courant as well as The Chicago Cubs, 10 dailies and 23 TV Stations, filed for bankruptcy yesterday in an effort to buy itself more time to either save or sell its ailing businesses. Although other papers are experiencing tough times (even newspaper giant The New York Times is talking with lenders to help repay the staggering debt it owes) The Tribune Co. has been operating in the red for so long and spreading itself so thin with outsourcing that media experts and company insiders acknowledge that it will likely be close to impossible for them to recover, even with serious overhauling.

It's hard to know exactly what this growing instability of the medium, coupled with the economic crises, means for the future of print journalism. Buyouts are encouraging some of the best, most experienced (read: highest-paid) journalists to leave their papers, and those who remain are left to deal with job insecurity and low company morale. While journalism can certainly be effective, provocative and informative through the channel of new media - where costs are lower, advertisers are more easily enticed and news feeds can be updated in real time - I still feel an early onset of nostalgia for what hasn't even been lost yet. There is something so wonderfully serendipitous about reading the newspaper and stumbling upon an unexpected gem. The physicality of spreading out the Sunday paper, swapping sections and sipping a cup of coffee just does not translate to a laptop. Is this really the end, or can papers like The Courant rally, re-energize and bounce back? I'm keeping my fingers crossed for a rebirth.
Posted by The Connecticut Forum at 9:32 AM 2 comments: Links to this post

Labels: Journalism, The Economy, The Hartford Courant, The Tribune Company

It seems that times are really tough...

The state of education funding in California: Ads on Test Add up for Teacher

Maybe it's just me, but I feel if there is any chance for the State or for the Union, it is going to depend on the education that is provided to our kids today. I certainly understand that current economic conditions leave our elected officials with some tough decisions, but isn't it just obvious that the best "economic stimulus" action we can take is to make sure future workers are prepared to work? When teachers are left scrambling to make copies of tests by selling ad space, just what message does that give to kids? "Your education is not important enough for us to fund." "You are a commodity and access to you is more valuable than educating you."

How about here in Connecticut? Check out this Connecticut Voices for Children Report.

I do not think the state budget is swimming in pork. In fact, I know there are tremendously valuable and needed programs and services funded by the state. I'm also convinced, though, that educating our children should be last on a long list of places to cut budgets.

Posted by The Connecticut Forum at 7:10 PM No comments: Links to this post