It seems, in the mind of many kids:


Perhaps I can ad from my own anecdotal experience you could rewrite this as:

Posted by Pat at CT Forum at 3:08 PM No comments: Links to this post

It seems the zero-tolerance monster is rearing its ugly head and the boy scouts are falling like dominoes.

Things are rough in 's .

Evidently, there is a gang of rampant, first-grade, ankle biters running around. And, their weapon of choice is a camping, knife-spoon-fork combination thingy. Cherubic, Zachary Christie was evidently so excited about joining the cub scouts that he brought his fork-spoon-knife thingy to school and that is where the iron fist of the law came slamming down.

For this egregious offence, suspension and the possibility (I’m not kidding) for reform school time.

Now, maybe darling Zachary is a holy terror and can’t be trusted with a down pillow, never mind a spoon-knife-fork thingy in school. Fair enough. Having worked many years with holy-terrors myself, I’ll give the school the benefit of the doubt. If that is the case, then the issue here is behavior of a particular child, not weapons in school. Somebody needs to have the cajones to deal with said child and parents as such and not hide behind a policy.

Next on the docket: student Matthew Whalen.

Now, where I might expect a kid like Zachary (above) to be a trouble maker, Matthew seems to be downright, goodie-two-shoes. Not only is he an Eagle Scout, Junior ROTC and has an award for saving a life, but he keeps an emergency kit in the trunk of his car. (The only emergency kit I ever had in my car was the spare change I kept in the ash tray in case I wanted a Slurpie on the road…until I lost the ash tray.) The problem? Matthew had the audacity to keep a two inch pocket knife in the kit. That, according to school officials is a weapon and for that he must be punished: 20 days suspension. Dare I state the obvious that this “weapon” was locked securely in the trunk of the kid’s car and next to it was probably a tire iron which is way more dangerous. Or perhaps, that anyone on the baseball team is likely to have a bat in their car which would inflict far more damage than the knife. Or maybe, even that Matthew was statistically an absolute menace to life and property when he got behind the wheel of the car and drove it and was much more likely to hurt or kill someone out of inexperience than intent with that knife.

Nope, none of that matters.

Here are the facts. Zero-tolerance policies don’t work. According to a study by the American Psychological Association, they do not reduce and even increase violent behavior in schools. They do not promote consistency in discipline in schools. They even seem to encourage drop-outs. All they seem to do is relieve school administrators from the responsibility of, oh I don’t know, being school administrators. I’ve always figured the reason adults teach the children is that the adults have better judgment. It doesn’t seem that way in these two cases.

In the interest of full disclosure, I've been carrying a pocket knife since I was 12. I've only ever stabbed myself, and that was an accident.
An addendum from my friend Becky!
Girls are trouble makers too! No knives here, but clearly a danger to herself and others...

Posted by Pat at CT Forum at 12:19 PM No comments: Links to this post

Racism is Alive and Well (In case you were wondering)

It seems Keith Bardwell, justice of the peace for Tangipahoa Parish's 8th Ward, is not the hopeless romantic we all thought he was. Keith has a standing policy when it comes to justice-of-the-peaceing, no interracial marriages. According to him, they just don't work out and, in the interest of "the children" he figures that mixed race kids are neither accepted by whites or blacks.

"I'm not a racist. I just don't believe in mixing the races that way." — Keith Bardwell, justice of the peace in Louisiana's Tangipahoa Parish, explaining why he refused to issue a marriage license to an interracial couple.


So Keith:
A+ for standing up for your convictions.
F for having the convictions of a Southern racist caricature.


(I can't wait for all this National News coverage when a gay couple is denied a marriage license.)

Here's a recent world-wide-web find that I just had to share...It's Cake Wrecks!
It seems all who work in the Cake Decorating Craft are not up to the same level as our Forum Panelist Duff Goldman. Some are...well, you should check out the site.

Posted by Pat at CT Forum at 1:00 PM No comments: Links to this post

David Javerbaum Joins Panel for It's Satire! (Who's He?)

Who is David Javerbaum, you ask?

Well, he's the guy Jon Stewart called as a "lifeline" while participating on the TV game show, Celebrity Millionaire.

He's won a few (11!) Emmy awards producing and writing for The Daily Show.

And perhaps most importantly, he was a finalist on the Jeopardy! 1988 Teen Tournament and its 1998 Teen Reunion Tournament. ("Yes, Alex. I'll take Clearasil for 500, please.")

Then, of course, there's his latest book (released today!), What to Expect When You're Expected: A Fetus's Guide to the First Three Trimesters. Here's a quick "get to know you" video of Javerbaum discussing his book.

We're really looking forward to laughing along with David Javerbaum and fellow Forum panelists Jason Alexander and Samantha Bee at It's Satire! on Saturday, November 14th.

You can read more about David Javerbaum here.

Posted by Ruth at CT Forum at 9:57 AM No comments: Links to this post

Labels: David Javerbaum, It's Satire, The CT Forum, What to Expect When You're Expected

Now that you've gotten to know our "Revolutionary" Forum panelists, it's time for a little quiz!

**Hint: All of the answer choices below are the actual responses of our panelists and moderator from Revolutionary Thinkers. **

1. What is something Sara Lawrence-Lightfoot can't live without?
a). Music
b). Family
c). Conversations with her dad
d). Her coat collection
e). Darwin

2. What is Juan Enriquez's favorite place in the world?
a). Home
b). Underwater, diving on a coral reef
c). On a yoga mat
d). A lake house in New Hampshire
e). Martha's Vineyard

5. What book is Allison Stewart currently reading?
a). Born to Run
b). Toni Morrison's The Bluest Eye
c). None
d). What is the What and The Greatest Generation
e). 10 different ones

But can you guess who else said what? Let us know if you need a hint.

Posted by Ruth at CT Forum at 3:07 PM No comments: Links to this post

A taste of some of the the revolutionary thinking going on at the Forum on Friday...

Do you have a favorite moment? Want to see more? Let us know!

Posted by Pat at CT Forum at 9:32 PM 3 comments: Links to this post

What a REVOLUTIONARY Evening!

Here are some behind the scenes photos! 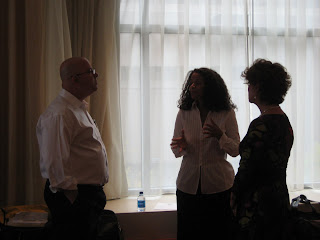 Doris and Richard Sugarman welcome Moderator Alison Stewart to Hartford. Alison was very very interested in learning about Hartford and seeing how the current economic climate has affected our town. 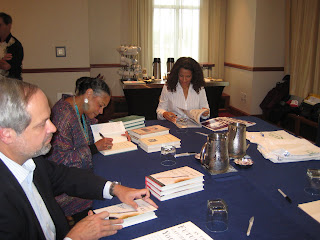 Alison, Sara and Juan chat about their hometowns while signing autographs at the panelist meeting. Here, the panelists meet for the first time and get acquainted before the evening begins. 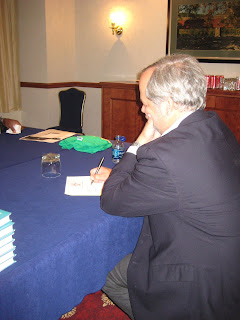 Want to know what Juan's favorite book is, or what is always in his refrigerator?
He answers those questions and more on our new panelist questionnaire.
Check back next week to see what all of our panelists shared! 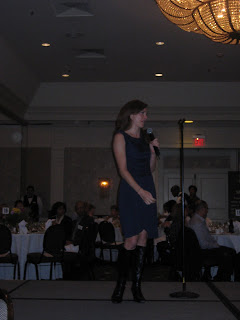 Jessica Jackley warms up the crowd at the pre-Forum dinner. 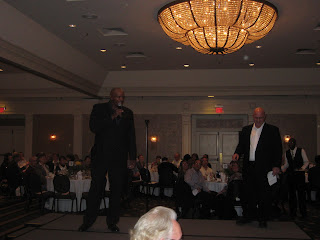 Will Allen and Richard Sugarman greet the pre-Forum dinner guests. Richard and Will were old college pals at The University of Miami! 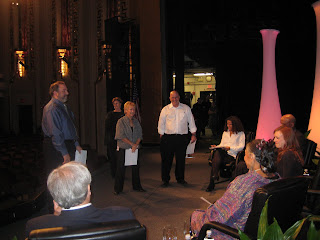 The panelists visit The Bushnell and meet our stage director Arnold Berman (at left). 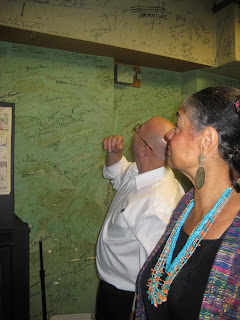 Richard and Sara admire the many signatures that adorn the walls backstage at The Bushnell. 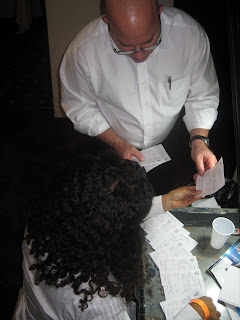 Alison and Richard sort through questions from the audience in preparation for the second half.

As you can imagine, it's easy to be intimidated by these big thinkers with even bigger accomplishments - but there was no need. They were all extremely friendly and kind, and seemed to be in awe of each other, just as we were all in awe of them. Revolutionary Thinkers proved to be just what we hoped...an inspirational, educational, and motivational evening full of ideas, reflections, and insights.
Come back soon for behind the scenes videos and more!

Posted by Katlyn at CT Forum at 8:28 AM No comments: Links to this post