So, by now everybody and his uncle who cares about such things saw that Jim Crowley of the Cambridge Police Department, Skip Gates, Joe Biden and Barack Obama (you know, just four regular guys) sat down and had beers. I personally found the scene depicted above rather troubling.

Now I'm almost certain that Jim is drinking a Blue Moon. It is definitely a hefeweizen. Nice Jim...nice.

Skip reported that he liked Red Stripe. That is a perfectly respectable choice, though I have it on good authority that unless you get it and drink in in Jamaica, it is just not the same. The beer in his glass, however, does not look like Red Stripe to me. That, my dear friends, is not pilsner lager.

Here's where things get bad, though. It has been widely reported that Messrs. Obama and Biden would be drinking (gag) Bud Light. The #1 and #2 leaders of the free world can do no better than Bud Light? In the immortal words of Studs Terkel, "It's not the bomb we have to worry about...it's banality. We aren't going to go out in a big bang. We're going to go with a sigh." [from our 1997 Forum Wisdom of Sages]

There is some hope, however. I have polled some experts on the subject who have these recommendations for the President about a proper beer to drink...

Erin: Black Butte Porter, Deuschutes Brewery
Becky: Something by Sam Adams, Boston Brewery...not elitist but tasty. Many options for every palate.
Benjamin: Ballast Point IPA, San Diego OR Dogfish Head 60 Minute IPA
Leon: Sam Adams Summer or any of the seasonals
Katlyn: Said something about blueberry beer, but it was starting to get a little fuzzy at theis point.

And I? Well, I have two favorite beers: free and cold. After that, I'm no connoisseur.

Speaking of race relations...if you really wanted to find divergent yet thoughtful ideas about race in America, who would you choose? How about, oh...William F. Buckley and Chuck D.? 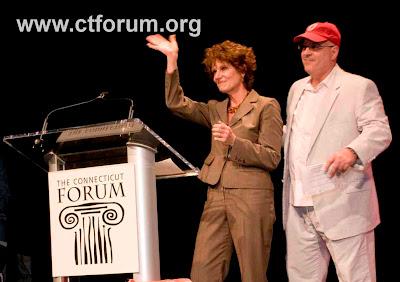 Doris and Richard Sugarman in May 2009 , Photo by Wayne Dombkowski
Our own CT Forum Executive Director Doris Sugarman and Founder Richard Sugarman have been named by Hartford Magazine as two of Greater Hartford's 50 Most Influential People of 2009. This directory of "who's who" in Greater Hartford identifies people who have "helped shape the look, feel, culture and vibrancy of our area in a positive way."

The Sugarmans started The CT Forum in 1992 with the mission:

To encourage the free and active exchange of ideas in Forums that inform, challenge, entertain, inspire and build bridges among all people and organizations in our community.

For 18 years, they've been doing just that - whether it's at large, public Forums at The Bushnell theatre featuring experts and celebrities, or in schools and community organizations throughout Greater Hartford, or as active Board members for various area non-profits.

Without a doubt, the influence of this dynamic duo - if measured by their ability to be a catalyst for individual and community change, or to inspire and motivate others to act in positive ways - knows no bounds.

It ripples, starting in Hartford and extending far beyond, turning conversations into collaborations, ideas into actions, and individuals into communities.

We're all better for it, and the rest of here at The Forum couldn't be more proud. 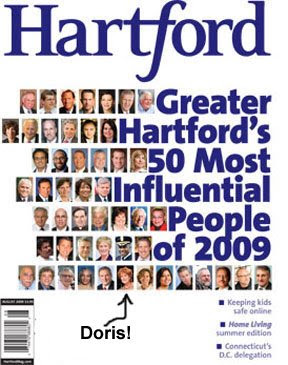 Up Against The Wall, Esteemed Professor Gates.

As the saying goes, I have black friends (I do). I work with many African American youth from around Greater Hartford. I have a twenty year history of taking care of kids of color at summer camp. For a white guy, I’d say I am pretty well versed in the politics of race in this country.

That, however, doesn’t make me black.In fact, the more I know, the more I realize how much I don’t know. The color of my skin has automatically ensured that I have an entirely different experience than someone born an African American.

All that being said, I’m left with lots of questions regarding the recent arrest of prominent black-studies scholar and Harvard Professor Henry Gates in front of his home earlier this week.

As with all conflicts there are some divergent stories about what transpired that day.

Would a call have been made to the police at all, had it been two white men forcing their way into a house? Might the neighbor have wandered over to lend a hand?

Would a white man have reacted to police arriving at his door in a different way? Would he have hesitated to identify himself or follow instructions?

And, perhaps most interesting to me, how might we, black and white, have reacted differently had a white man been arrested that afternoon? Would black pundits be decrying police abuse of power? Would whites be dismissing the affair as being blown out of proportion?

I will not add to the rancor here and take a side, as it were, in this particular incident. I will say, with utmost confidence, though that the event proves one thing clearly. We are still a nation struggling with issues of race. Who ever is right or wrong in this case doesn’t matter. That there is a case at all shows we have work to do. 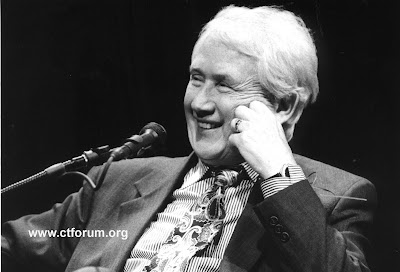 When we asked Nobel Prize-winning author Toni Morrison several years ago who she might like to have a conversation with on stage at The CT Forum, she didn't hesitate with her response: Frank McCourt.

And on one memorable evening back in May of 2001, to our great delight, she did just that.

Thank you, Toni, for having that conversation with the wonderful Frank McCourt - an exchange of thoughts and ideas that is as intriguing now as it was then.

Today, we celebrate the life of Frank McCourt. We celebrate his vibrancy, his warmth, his hard-won wisdom, and his incomparable wit.

"He says, you have to study and learn so that you can make up your own mind about history and everything else but you can’t make up an empty mind. Stock your mind, stock your mind. You might be poor, your shoes might be broken, but your mind is a palace."
— from Angela's Ashes

"People everywhere brag and whimper about the woes of their early years, but nothing can compare with the Irish version: the poverty; the shiftless loquacious father; the pious defeated mother moaning by the fire; pompous priests; bullying school masters; the English and the terrible things they did to us for eight hundred long years.


"It’s lovely to know that the world can’t interfere with the inside of your head."
— from Angela's Ashes

"Love her as in childhood
Though feeble, old and grey.
For you’ll never miss a mother’s love
Till she’s buried beneath the clay."
— from Angela's Ashes

For more video clips of Frank McCourt at the CT Forum, visit CTForum on YouTube.

Posted by Ruth at CT Forum at 9:28 AM No comments: 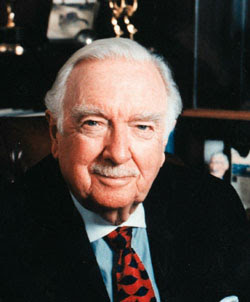 Walter Cronkite, legendary CBS Evening News anchorman and former Forum panelist has passed away at the age of 92 after a long battle with cardiovascular disease.

Mr. Cronkite visited The Connecticut Forum in 1999 as a member of the Integrity and the Media panel alongside Mike McCurry, Ben Bradlee, and Rita Braver.

For more on Cronkite, and the long legacy he will leave behind, visit CBS News' tribute pages.

Posted by Katlyn at CT Forum at 9:13 PM No comments:

Al Franken Gets the Last Laugh 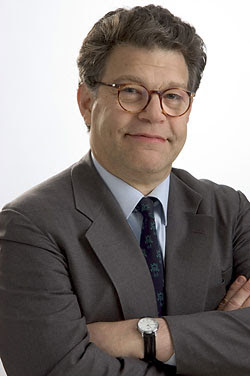 Well the "Land of 10,000 Lakes" took what seemed like 10,000 years, but the Minnesota Supreme Court finally ruled yesterday in a unanimous decision to certify Al Franken's election victory last November. The final margin of victory for Franken was 312 votes out of 2.9 million cast, which translates to a whopping .01%. So, if anyone tells you that your vote doesn't count--they're still probably right, I don't even think I know 312 people, although Facebook tells me otherwise.

Franken's victory now gives the Democrats a 60 vote filibuster-proof majority in the senate, at least theoretically. The very fragile supermajority assumes that the two independents who caucus with the Democrats (Arlen Specter and Joe Lieberman) will actually vote with the Democrats, not to mention the 56 other Democrats, two of whom (Ted Kennedy and Robert Byrd) are in poor health. Republicans have traditionally been better at getting their congresspeople to march in lock step with the party agenda, so just how filibuster-proof the Democratic majority turns out to be is, as yet, completely unknown.

Franken, of course, holds the world record for appearances on a Connecticut Forum panel by a senator, most famously sparring with Ann Coulter in 2004, but also participating in A Spoof on Presidential Politics in 1996. Chris Dodd, though, could tie Franken with another appearance.

At any rate, a hearty congratulations to Al Franken from everyone in the Connecticut Forum Family. I think we can all agree that it'll be nice to never have to hear the following again: