Azar Nafisi, Author of "Reading Lolita in Tehran," to speak at the Forum Book Club

Azar Nafisi, Author of Reading Lolita in Tehran
will be a Panelist at
Forum Book Club
Saturday, May 7, 2011

Azar Nafisi is best known as the author of the national bestseller Reading Lolita in Tehran: A Memoir in Books, which electrified its readers with a compassionate and often harrowing portrait of the Islamic revolution in Iran and how it affected one university professor and her students. Earning high acclaim and an enthusiastic readership, Reading Lolita in Tehran is an incisive exploration of the transformative powers of fiction in a world of tyranny. The book has spent over 117 weeks on the New York Times bestseller list.

Nafisi is a Visiting Professor and the Executive Director of Cultural Conversations at the Foreign Policy Institute of Johns Hopkins University’s School of Advanced International Studies in Washington, DC, where she is a professor of aesthetics, culture, and literature, and teaches courses on the relation between culture and politics. Nafisi held a fellowship at Oxford University, teaching and conducting a series of lectures on culture and the important role of Western literature and culture in Iran after the revolution in 1979. She taught at the University of Tehran, the Free Islamic University, and Allameh Tabatabai before her return to the United States in 1997 - earning national respect and international recognition for advocating on behalf of Iran’s intellectuals, youth, and especially young women. In 1981, she was expelled from the University of Tehran for refusing to wear the mandatory Islamic veil and did not resume teaching until 1987.

Nafisi also conducted workshops in Iran for women students on the relationship between culture and human rights; the material culled from these workshops formed the basis of a new human rights education curriculum. She has lectured and written extensively in English and Persian on the political implications of literature and culture, as well as the human rights of the Iranian women and girls and the important role they play in the process of change for pluralism and an open society in Iran. She has been consulted on issues related to Iran and human rights both by the policy makers and various human rights organizations in the US and elsewhere. She is also involved in the promotion of not just literacy, but of reading books with universal literary value.

Azar Nafisi has written for The New York Times, Washington Post, and The Wall Street Journal. Her cover story, “The Veiled Threat: The Iranian Revolution’s Woman Problem” published in The New Republic (February 22, 1999) has been reprinted into several languages. Additionally, she has published a children’s book (with illustrator Sophie Benini Pietromarchi) BiBi and the Green Voice. Azar Nafisi’s most recent book, Things I Have Been Silent About: Memories, a memoir about her mother, was published in January 2009. She is currently working on a book entitled Republic of the Imagination, which is about the power of literature to liberate minds and peoples.

See Nafisi speaking about her home country of Iran

Posted by The Connecticut Forum at 9:33 AM No comments: 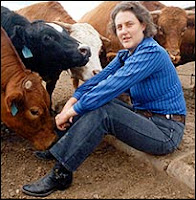 
"If I could snap my fingers and become nonautistic I would not do so. Autism is a part of who I am." - Temple Grandin

Temple Grandin's doctors confused her autism with brain damage when she was young, and she didn't speak a word until she was nearly four years old. Despite her early silence, these days her words carry weight. Grandin is an important autism advocate, helping raise awareness and understanding about the experience of autistic individuals. A recent HBO movie about her life, starring Claire Danes, has received 15 Emmy nominations. This year, Grandin was included on the Time Magazine list of 100 people who most affect our world. We're excited to welcome her to The Connecticut Forum for The Glorious, Mysterious Brain on November 11, to join Steven Pinker.

In addition to her work as an autism advocate, Grandin is also an accomplished doctor of Animal Science and a consultant on animal welfare issues. She has worked to improve standards in slaughterhouses and livestock; her ability to notice detail and understand the experience of cattle and other animals helps her to "see" the issues with the way livestock are treated and handled. She teaches Animal Science at Colorado State University.

Grandin brings a unique perspective to the panel, as she is able to explain the way she and other autistic individuals think "in pictures". You can watch her on TED, talking about how the world needs all kinds of minds to encourage all kinds of thinking.

Posted by Jamie at CT Forum at 4:55 PM No comments:

The Connecticut Forum Announces:
Steven Pinker will join us for
The Glorious, Mysterious Brain
Friday, February 25, 2011

One of Time Magazine 2004's 100 Most Interesting People. A Harvard professor and world renowned researcher. Author of seven books and numerous articles. The Connecticut Forum welcomes Steven Pinker for The Glorious and Mysterious Brain Panel!

Steven Pinker is Harvard College Professor and Johnstone Family Professor in the Department of Psychology at Harvard University. Until 2003, he taught in the Department of Brain and Cognitive Sciences at MIT. He conducts research on language and cognition, writes for publications such as the New York Times, Time, and The New Republic, and is the author of seven books, including The Blank Slate, The Language Instinct, How the Mind Works, and most recently, The Stuff of Thought: Language as a Window into Human Nature.


You can also take a look at his website, or check out his real-life genome.

Posted by The Connecticut Forum at 1:40 PM No comments:

Joel Klein Comes to The Forum!

Joel I. Klein became New York City schools chancellor in July 2002 after serving in the highest levels of government and business. When Mayor Michael R. Bloomberg appointed Mr. Klein, a graduate of New York City public schools, as the first chancellor of the newly-reorganized Department of Education, he called the new chancellor, “a true leader who never shies away from the tough and sometimes controversial decisions that are necessary to implement change.”

Mr. Klein’s comprehensive education reform program, Children First, is transforming the nation's largest public school system into a system of great schools. These initiatives have made a real difference for New York City students -- achievement is up, students and families have more and better choices, schools are safer, and principals are more empowered. He has also served as assistant attorney general in charge of the U.S. Department of Justice’s antitrust division and as the chairman and chief executive officer of Bertelsmann, Inc.

Also active in community service work, Mr. Klein has participated in Big Brothers, served as chairman of the board of the Green Door, a pioneer community-based treatment program for mentally ill residents of the District of Columbia, and as treasurer of the World Federation for Mental Health. He was a member of a U.S. Department of State delegation in 1991 to examine issues of psychiatric abuse in the Soviet Union. He has also served on the board of several non-profit organizations, including the National Symphony Orchestra Association.

Watch Klein in an interview with Charlie Rose :

The Connecticut Forum Announces:
David Gergen to be a Panelist at
The End of Civility?
Saturday, October 2.
Few know the political backroom as well as David Gergen. As an adviser to four U.S. presidents and a senior political analyst for CNN, Gergen has made a career of bearing witness to some of the most compelling political figures of our times. In 2000, he published the best-selling book, Eyewitness to Power: The Essence of Leadership, Nixon to Clinton.

These days, Gergen works as a political journalist and analyst. He was the first managing editor of Public Opinion, a magazine affiliated with the American Enterprise Institute, and from 1985-1986 he worked as an editor at U.S. News & World Report, where he remains an editor-at-large. Gergen’s career in television began in 1985, when he joined the MacNeil/Lehrer NewsHour for Friday night discussions of politics. Today, he appears frequently on CNN as an analyst for Anderson Cooper 360 and The Situation Room.

Gergen is also a professor of public service and the director of the Center for Public Leadership at the Harvard Kennedy School, having joined the Harvard faculty in 1999. He is active as a speaker on leadership and sits on many boards, including Teach for America, The Aspen Institute, and the Center for Global Development. He is a member of the Washington D.C. Bar and the Council on Foreign Relations, and holds 18 honorary degrees.

He graduated with honors from both Yale College (1963) and Harvard Law School (1967), and served as an officer in the U.S. Navy. In 1971, Gergen joined the Nixon White House as a staff assistant on the speech writing team, a group of heavyweights that included Pat Buchanan, Ben Stein, and Bill Safire. Two years later, he took over as director. Gergen went on to become the Director of Communications for Gerald Ford and Ronald Reagan, a counselor on domestic and foreign affairs for Bill Clinton and his Secretary of State, Warren Christopher, and an adviser to the 1980 George H.W. Bush presidential campaign.

For more information on Gergen, visit his website or his Harvard faculty profile.

David Gergen on the issue of civility during the 2008 Presidential Campaign:

Posted by The Connecticut Forum at 11:38 AM No comments: