CT Forum Brings Music to the Streets of Hartford

Don't forget your dancing shoes this Saturday! We're bringing music to the streets as part of our Forum Music Fest celebration, with live performances by more than a dozen local musicians including jazz and brass ensembles, Haitian music, salsa, classical musicians and others. See them live on Pratt Street, Capital Avenue and in and around the Bushnell theater, beginning at 5PM. 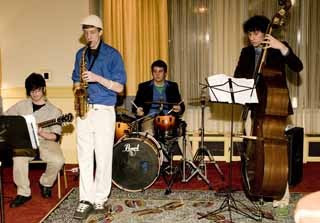 The Brian Bartus Quartet
The schedule of musicians is as follows:

4:45pm, Pratt Street: The Sweetest Key
The Sweetest Key is a female acapella group from the Greater Hartford area. They arrange their own work and sing music of all genres and styles!

7:00pm, The Courtyard at The Bushnell: D'Tay
D'Tay is a group of talented musicians who perform Haitian Kompa. Their main focus and goal is to make a difference and touch people's lives through their music.

7:30pm, the Mortensen Theater at The Bushnell: Kris Allen
Kris Allen is a saxophonist and composer who was the young protoge of the great Jackie Mclean, with whom he studied at the Artists Collective and The University of Hartford. Allen is the director of The Hartford Jazz Society New Directions Ensemble.

In collaboration with the Haitian Health Foundation, we will also be collecting items in The Bushnell lobby to help the victims of the Haitian earthquake, specifically: multi-vitamins with iron for children, adult multi-vitamins, new children's underwear, and protein-rich fatty foods like Spam, tuna in oil, and peanut butter.

At 8PM, we will welcome renowned musicians Patti Smith, John Legend, and John Forte to the Bushnell stage for a live, unscripted panel conversation about everything from performing and creating, to their personal lives and causes, to the power music has over us all. The evening will include a lively audience Q&A exchange, surprise musical moments from the panelists, and so much more! See you there!

Posted by Ruth at CT Forum at 4:38 PM No comments:

We are excited to announce that John Forté
will join us at The Forum Music Fest on May 1. 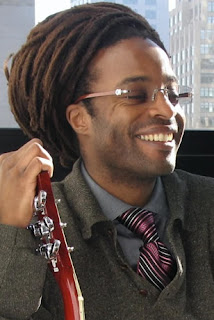 orté's life has been an amazing story of twists and turns, major accomplishments and hard knocks. Today he tells his story and the lessons learned with music as his vehicle for sharing and healing.
John Forté is famous for his work with the multi-platinum group The Fugees. He wrote and produced two songs on their Grammy winning album, The Score. After the breakup of The Fugees, he recorded two solo albums, PolySci and I, John, which featured industry legends Herbie Hancock and Carly Simon, and will soon release an album titled Water Light Sound.
Few understand second chances better than John Forté.
After serving seven years of a 14-year sentence following a conviction on drug charges, he was granted a rare commutation of his sentence by President George W. Bush. His strong advocates included Carly Simon and Sen. Orin Hatch. Recognizing prison as an opportunity to redeem himself, Forté created a music program, conducted weekly round table forums for inmates and began pursuing his degree at the London School of Economics.
Released from on December 22, 2008, Forté resumed his career by starting to record in the studio, writing a book and serving as the subject of a feature-length documentary about his life. He teaches a music course to teenagers at In Arms Reach, a Harlem-based initiative committed to promoting a positive environment for children of incarcerated parents and at-risk youth. Forté uses music as a therapeutic means of addressing anger, stress and pain, and hopes that the catharsis of song composition will help children deal with the stigma of having an incarcerated family member. His historic commutation has also made him an ardent supporter of prison reform. He argues that a sentence need not be unreasonably long to provide just punishment, deter criminal conduct and protect the public from harm.
Raised by a single mother in , John was a brilliant young musical prodigy. A dedicated student, Forté was awarded a full scholarship to the prestigious and attended until his career in the music industry took off. He is a classically-trained violinist.
Hear John tell his story in his own words...

Posted by Katlyn at CT Forum at 9:59 AM No comments: 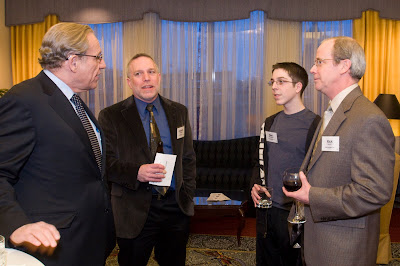 Ben Friedman (second from right) chats with Bob Woodward at the pre-Forum dinner.

Ellington High School Freshman and Connecticut YOUTH Forum member Ben Friedman had the opportunity of a lifetime: to meet panelist Bob Woodward at the exclusive dinner before our last Forum, A World of Change. When Ben mentioned his interest in writing and journalism, Woodward encouraged Ben to send him a review of that evening's Forum, with the promise that he would offer his feedback. Ben followed up and, as promised, Woodward responded to him! You can check out their notes to one another below.

My name is Benjamin Friedman. You may remember me from the dinner before the CT Forum show started. When you and I met, I had explained my interest in writing and you suggested I write a review or report on the show and e-mail it to you. This is that e-mail. I feel that it is necessary that I share some background information about myself before you read the review. I am fourteen years old and attend Ellington High School as a freshman. I am not certain what type of career I'd like to pursue, but reading and writing has captivated me for as long as I can remember.

However, I promised a review/report, so I will deliver upon that promise. This report was written on March 5th, a day after the Forum. I used my memory as best as I could to write the report. Despite my age and experience, I hope that if you plan to critique this report that you do so normally. I believe that the best way to improve myself as a writer is to take people's honest reactions to what I have written and use that as a tool to fix my mistakes. Let's begin.

The Connecticut Forum’s A World of Change show featured panelists Bob Woodward and Tina Brown. The show was moderated by Pulitzer Prize winner, Connie Schultz. With this combination of journalists, the night was ensured to be exciting. Bob Woodward, author of All of the President’s Men and one of the journalists who uncovered the Watergate scandal, provided intriguing anecdotes from his meetings with presidents and government officials. The experience of Tina Brown brought out commentary concerning process and changes. Connie Schultz did a fine job of directing the conversation on stage and made certain that all points of any question were answered.


The night proved to be hilarious, entertaining, and thought-provoking. Especially interesting was Woodward’s idea that “you can think you are so right, and then turn out to be completely wrong.” Everyone in the audience agreed with applause and a thoughtful, “Hmm.” However, the first half of the show strayed off the night’s true topic, change. Discussion was made that revolved around change, but it wasn’t until the second half of the show that most of the conversation was about change. The audience showed that they were listening intently and also thinking hard about what was said on stage by providing the panelists with interesting questions that they submitted. These questions led to discussion about change in America and the world, and also what change means.

It was not a night to be missed. A controversial topic and even more controversial panelists mixed together for an unforgettable evening. Mr. and Mrs. Sugarman, the founders of the Connecticut Forum, certainly stirred up interest in the Forum with this latest show. No doubt they will continue to provide successful shows and exciting panelists for years to come.

So there it is. I would like to say that nonfiction is not my strongest point, but I feel as if that would actually be me trying to excuse any errors I made. Hopefully you enjoy reading this review as much as I enjoyed meeting you and seeing the show.

Thank you for your time, and great job on stage!

Ben: I finally read your account of the Forum. You did an excellent job. I would suggest you put a specific thought in the first sentence to draw readers in. For example, you could have said something like this: Veteran journalist Bob Woodward last night that it is so easy to be sure you are right and you turn out to be dead wrong. (but use the quote as you did, and then cite the example of the Ford Pardon then something Tina Brown said. ) As my old editor used to say, What's the lead? What's the headline? What is new? Be as specific as you can as early in the account or story as possible. Nice work. Bob Woodward

Posted by Jamie at CT Forum at 9:52 AM No comments: 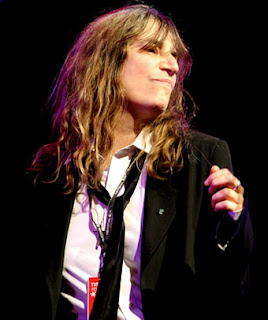 Rock and Roll Hall of Famer, Poet, Author, and Creative Spirit Patti Smith will join John Legend and Wyclef Jean at The Forum Music Fest on Saturday, May 1, 2010.

Patti Smith has been making a mark as a musician and artist since the 1970s. Her recently released memoir, Just Kids, about the music scene in in the 1970s and her relationship with photographer Robert Mapplethorpe, has become a best seller.

Inducted into the Rock and Roll Hall of Fame in 2007 and this April awarded the American Society of Composers, Authors and Publishers (ASCAP) highest award, the Founders Award, ASCAP President and Chairman Paul Williams said, "Patti fused raw rock energy with the heart of a poet and ignited the 1970s New York punk scene. She expanded the boundaries of artistic expression, musically and otherwise, inspiring generations of rockers worldwide. She continues to be a vibrant, prolific artist, working in a wide variety of media.”
Smith has described her work as “three chords merged with the power of the word.” Her first album Horses (1975) fused punk rock with poetry, and the cover photo by Mapplethorpe became a rock classic. Her album Easter (1978) included her best known hit, Because the Night, co-written with Bruce Springsteen.

In 1988 Smith and then husband Fred “Sonic” Smith recorded Dream of Life that included the classic anthem, People Have the Power. A documentary about Smith, Patti Smith, Dream of Life, premiered at the Sundance Film Festival in 2008.
Smith has released 18 music albums, published 14 books of poetry and art, and performed and exhibited around the world. She has been nominated for two Grammy awards, has received poetry awards and an honorary doctorate, and was awarded the highest honor given to artists in , the Commandeur des Arts et des Lettres. Smith also received the prestigious Women of Valor Award at the ROCKRGRL Music Conference on - exactly 30 years to the day since Horses’ release.
Smith is politically active and participates in benefit work and in various human rights organizations, including the , Jewel Heart, and the Tibet House Foundation. The song 1959, about the Chinese invasion of from the album Peace and Noise, was nominated for a Grammy in 1998.