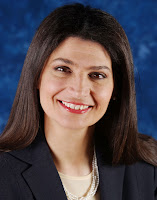 As vice president of the National Education Association (NEA), Lily Eskelsen is one of the highest-ranking labor leaders in the country and one of its most influential Hispanic educators. Named Utah Teacher of the Year after teaching for only nine years, later serving both the Utah Education Association and the NEA, Eskelsen believes that educators are professionals with the responsibility to take action, individually and collectively, to make the promise of public education a reality and to prepare every student to succeed.

Eskelsen began her career in education as a lunch worker in a school cafeteria and a kindergarten aide before pursuing degrees in elementary education and instructional technology. She taught kindergarten to sixth grade in the middle-class suburbs of Salt Lake and its one-room shelter school. She has taught children labeled gifted and children labeled homeless. In 1989, after being named Utah Teacher of the Year, she used the platform to speak out against the dismal funding of Utah schools. She was subsequently elected president of the Utah Education Association, her first elected position in the Association. She has also served on the NEA Executive Committee, and as NEA Secretary-Treasure.

Eskelsen was president of the Utah State Retirement System, president of the Children at Risk Foundation, and a member of the White House Strategy Session on Improving Hispanic Education. She has built alliances with parents, business and civil rights organizations, and with advocates for the disabled and the poor. In 1998, she ran for political office as the first Hispanic to be chosen as her party’s nominee for U.S. Congress in Utah, raising close to $1 million and taking 45% of the vote against the incumbent.

Eskelsen authored a humor column on parenting that ran in 22 local newspapers. Her advice for parents has been published in Time, Working Mother and Parenting magazines. She’s been featured on Fox News’ “Hannity & Colmes” and CNN’s “Lou Dobbs Tonight.” She has been the invited keynote speaker for hundreds of education events and was highlighted by Education World in their “Best Conference Speakers” edition.

We believe Lily's perspective and experience will bring much to this important conversation.  Hope to see you at The CT Forum! 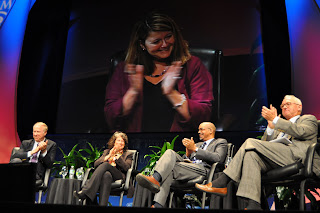 However, there's no end to the questions we all have about civility. We were inundated with audience questions for the panelists during Intermission - many more questions than we could possibly address in the Q&A during the Forum's second half. For now, we can only imagine Stephen Carter's response to the question, Who are we to judge what is civil behavior? or Christopher Buckley's facial expression when asked, In 20 years, will there be anyone left who knows what civility is?

Here are just a few of the thoughtful and provocative questions that we're continuing to think about and discuss. We hope you do the same!

Posted by Ruth at CT Forum at 5:17 PM No comments: