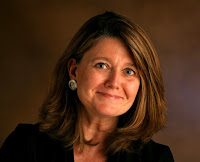 We are thrilled to once again welcome Connie Schultz to The Connecticut Forum as moderator for our first Forum this Season, "The End of Civility?" on Saturday, October 2, 2010.  Panelists for this Forum include David Gergen, Christopher Buckley, Stephen Carter, and Gina Barreca.

A nationally syndicated columnist for The Cleveland Plain Dealer and PARADE magazine's column "Back Page,"  Schultz won the 2005 Pulitzer Prize for Commentary for columns that judges praised for providing “a voice for the underdog and the underprivileged."
During the 2008 presidential race, she was a frequent guest on The Charlie Rose Show and also offered her Midwesterner's perspective on MSNBC's Rachel Maddow Show, HBO's Real Time with Bill Maher and C-SPAN’s Washington Journal.
Schultz is the author of two books published by Random House: …And His Lovely Wife, a memoir about her husband Sherrod Brown’s successful 2006 race for the U.S. Senate, and Life Happens – And Other Unavoidable Truths, a collection of essays.
In 2005, Schultz won a Scripps Howard National Journalism Award and a National Headliner Award, both for commentary.  She was a 2003 Pulitzer Prize finalist in feature writing for her series, The Burden of Innocence, which chronicled the ordeal of Michael Green, who was imprisoned for 13 years for a rape he did not commit.  The week after Schultz’s series ran, the real rapist turned himself in after reading her stories.  The series won the Robert F. Kennedy Award for Social Justice Reporting, the National Headliner Award's Best of Show and journalism awards from Harvard and universities.
In 2004, Schultz won the Batten Medal, which honors "a body of journalistic work that reflects compassion, courage, humanity and a deep concern for the underdog."  Recently, the Urban League of Greater Cleveland awarded Schultz the Whitney M. Young Humanitarian Award.
She has moderated two previous CT Forums: God in 2009 with Rabbi Harold Kushner, Christopher Hitchens, and Reverend Peter Gomes; and A World of Change in 2010 with Bob Woodward and Tina Brown.
Here's a clip of Connie in action last Season at A World of Change.