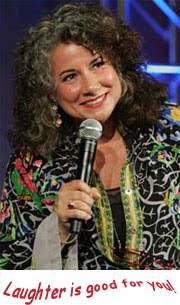 The Connecticut Forum Announces:
Gina Barreca to Join David Gergen and Christopher Buckley at
The End of Civility?
Saturday, October 2, 2010

Deemed a “feminist humor maven” by Ms. Magazine and “Very, very funny. For a woman” by Dave Barry, Gina Barreca is most recently the author of It's Not That I'm Bitter: How I Learned to Stop Worrying About Visible Panty Lines and Conquered the World. She has appeared on 20/20, 48 Hours, NPR, the BBC, The Today Show, CNN, Joy Behar, and Oprah to discuss gender, power, politics, and humor.

Her earlier books include the bestselling They Used to Call Me Snow White But I Drifted: Women's Strategic Use of Humor, and Babes in Boyland: A Personal History of Coeducation in the Ivy League; her books have been translated into several languages, including Chinese, Spanish, Japanese, and German. She’s the editor of seventeen books, including The Signet Book of American Humor and The Penguin Book of Women’s Humor as well as The Erotics of Instruction and A Sit-Down With the Sopranos.

You may recognize Barreca's name from her weekly column in The Hartford Courant, "Irreconcilable Differences". She also writes for the "Brainstorm" section of The Chronicle of Higher Education, blogs for Psychology Today, and occasionally spars with her former co-author (of I'm With Stupid: One Man, One Woman, and 10,000 of Misunderstandings between the Sexes Cleared Right Up) Gene Weingarten in his "Below the Beltway" column in The Washington Post. With degrees from Dartmouth College, Cambridge University, and the City University of New York, Barreca is Professor of English and Feminist Theory at the University of Connecticut.

Dr. Barreca on her female students and their fear of not dating:

Posted by The Connecticut Forum at 12:54 PM